At long last, the flowers bloom, sunsets linger, and bock pours sweet like springtime itself. This golden lager, an elusive fan favorite, is back to mark the season with rich, complex malt and easy drinkability.

(This beer does not qualify for free shipping)

Beer is not eligible for a return. If the product was damaged in transit, we will be happy to send a replacement.

Warning: Drinking distilled spirits, beer, coolers, wine and other alcoholic beverages may increase cancer risk, and during pregnancy, can cause birth defects. For more information go to www.P65Warnings.ca.gov

Sierra Nevada doesn’t make a bad beer and this one is no exception. If you like bock beer you won’t be disappointed. Keep up the great work!

T
Tomm Carroll
Here’s a Blast from the Past…

…an oldie but very goodie from one of CA’s OG craft breweries that’s been re-released for Spring. So it’s only appropriate to celebrate it with a parody of an old song that even predates legal home brewing.

🎶A springtime day
On a bright and sunny weekend
I am thirsty
Gazing in my cold box at the beers inside
Then discovered it was easy to decide:
I want Pale Bock, from Sierra Neva-a-da🎵

🎶I’ve drank brews
Of all colors and styles
But none pairs more with spring
I have no taste for Hazies
Hazies are not clear
I like a see-through beer that tastes like beer
I want Pale Bock, from Sierra Neva-a-da🎵 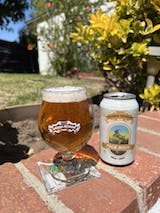