Shipping to California only!

We brewed this Hoppy Lager in collaboration with other California brewers and the California Craft Brewers Association. The CCBA is launching a celebratory and unifying beer that any CCBA member can brew to continue to tell the story of craft beer across the state of CA and, more importantly, fundraise for the association. The ask for all brewery participants is to donate the net proceeds of the product to help fund important CCBA programs and initiatives to support and advocate for California craft breweries

Warning: Drinking distilled spirits, beer, coolers, wine and other alcoholic beverages may increase cancer risk, and during pregnancy, can cause birth defects. For more information go to www.P65Warnings.ca.gov

Good beer nice balance. Had a very slight haze to it when I had it. I was expecting more of a hop aroma from the beer. However it wasn't underwhelming, it has a slight hop aroma but still allowed for the the lager yeast aroma to play a role. Not much as far as malt aroma. The beer was surprisingly balanced, I was expecting a hop forward bitterness and for the beer to be more hop aggressive. It was very balanced and it was very pleasant to drink. Well done!! 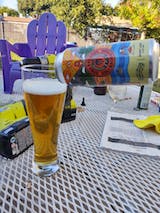 Thought it was a sold beer and I enjoyed drinking it. It was not memorable, or something that I would go out of my way to buy